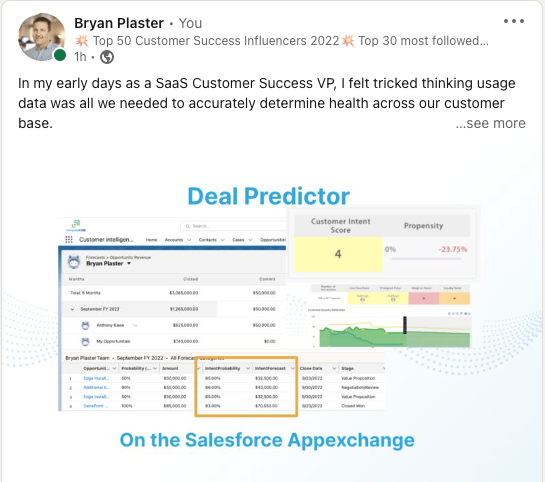 The story of the Deal Predictor!

In my early days as a SaaS Customer Success VP, I felt tricked thinking usage data was all we needed to accurately determine health across our customer base.

Everyone thought that renewals would just be automatic, but when we actually looked, we found that 30% of our customers were leaving us and we didn't know why!

We had just built our first data warehouse of usage data and our "early alert" system - in reality - was really just too late. Our team got together in an offsite to brainstorm how we can solve the problem to find struggling customers early enough to save them!

Our first renewals rep Doug raised his hand and commented that customers seemed to have cyclical patterns in their usage data that correlated with both our touch points, and their events. The current alerts were only based on highs and lows, they should be based what happens over time in these seasons and compared to our customer health trends over the same period.

Brilliant! We ran a mad effort to find the data on all of our customers to get a head of churn.

In our first effort, we found one customer whose usage data was oversubscribed, by a lot! We thought - not only did we find our best customer for a reference, but looks like they should be paying a lot more and we can upsell them! We tried to contact them, but it was also the case that no one had talked to this customer for a while, and they weren't answering our surveys either.

We finally were able to get a hold of this customer but it wasn't the conversation that we had expected. They stated that they were not going to renew with us. Their recent peak in usage was a migration of their data off of our platform to our competitors system! The absence of conversations, health and other data was an indicator in itself!

Wow, we really learned our lesson. It's the combination of multiple factors that happen over a period of time that can tell you exactly what your customer's intentions are, and we needed to "learn" the patterns of the customers in our business.

We hired a rocket scientist to help and celebrated with a forecast on renewals and expansions that was 90% accurate.

It was so popular that the sales team started to use it for their new deal forecast to add an intent probability to committed deals that sometimes fell into pipeline at the last minute.

Today most Sales and Customer Success teams have all of this objective data in their CRM - usage data, conversations with customers, surveys, health scores but they don't know how to bring it together without a data scientist.

Beat the recession starting at your company - utilize every bit of data on your prospects and customers to ensure that you have durable growth and don't stall out!

Just write "Deal Predictor" in the comments below to utilize your data to predict the future in a trial (or just curiosity!)

Either way we will enter you into a drawing to win an apple watch because time is running out! #customersuccess #sales